Autor: Andrei Vajna II, 8 Iunie 2017
“It's all part of the process of exploration and discovery. It's all part of taking a chance and expanding man's horizons.” It's part of Ronald Reagan's speech, which is also inserted in the ending of We Lost the Sea's "Departure Songs" album. Of course, in the context of the material, the meaning is complex, but it can be considered as the essence of the show performed by the three bands that hail from far away Sydney, Australia. They are three bands that embrace musical (and not only) experimentation. Unfortunately, the rock fans of Timișoara did not embrace the same motto on Monday night, as they showed up in extremely small numbers for such a special event. 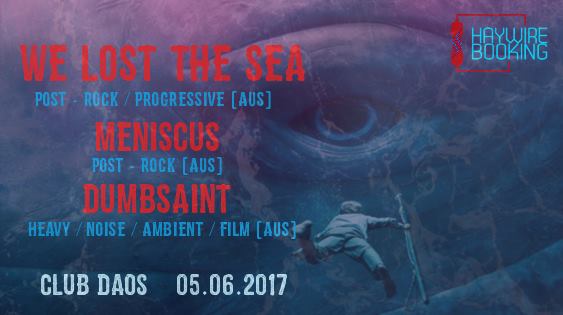 Dumbsaint, the first band to hit the stage, had the most unique setting of all. Their vision is to mix music with the art of filmmaking. Thus, each song is accompanied by a short film, written, shot and edited solely by the members of the band. This sounds special on paper, but the concept didn't really convince me. First of all, music and film has been successfully mixed even since the appearance of moving pictures. Even showing video during a live concert is not really something new. Indeed, what is eyebrow-raising for a rock concert is the fact the video material wasn't just some abstract animation that moves with the music, but real short movies that can be watched just as well as their own thing. Just the same, the music can be listened to without the films. The question that instantly arises is whether having the two together somehow offers the audience something extra.

The answer is... yes, and no. I didn't find that the music enriches the movie, only sporadically, in the sense that, of course, the music's rythm changed in tone with the scene. But I can't say that it somehow amplified the emotion transmited visually or that it offered new meanings to the material. And these things are the order of the day in cinematography, although quite often the music is used as a subversive tool to convey cheap emotion.

I don't want to say that what Dumbsaint is doing is bad. The mix doesn't hurt the experience at all. If anything, it offers you three different takes on the same matter, depending on how you want to consume it: just the music, just the movie, or both. And in the spirit of the opening motto, they took their chance at exploring different boundaries of artistic expression. And I can't say that they failed. Musically, they offered an interesting post-rock performance and the heaviest sound of the night. The cinematography was also of quality. The acting and editing looked decent, and the shots looked good, too. I especially liked the landscape ones. There was no amateurish feel to it, at all.

Meniscus were the most traditional of the three bands, at least as much as that can be said about a post-rock band. I could distinguish elements from funk and electronic music and their music felt quite optimistic and uplifting, with meandering melodies and the instruments building upon each other. The best example for this is the song "Head Rush", which I still have in my head. It repeats the same passage over and over, but each time adding an extra note, or a new element to it, even some synths and finally an energizing guitar. It's a masterpiece that combines compositional artistry with ingenuity in a very expressive package. Overall, I thought that the band doesn't follow any recipe and that each musical set piece had a grain of an idea on which they experimented and grew a song out of.

Robert Fripp once described music as “the cup that holds the wine of silence”. And while this definition holds with any of the three bands, it fits the best with We Lost the Sea. Indeed, their songs build up very slowly, with ample space between the notes. Even though there were six musicians on stage, quite often only two or three of them were actually playing anything. But the melodies that resulted sounded grandiose, and were as rich as they seemed simple and quite catchy from the start. Time dilated to the maximum, the echoes of the distinct notes creating the impression of cosmic vastness, of profound emptiness, with each listener in the center, beckoned to taste “the wine of silence” that the music holds within its bounds.

We Lost the Sea offered a complete package, playing only the “Desert Songs” album, from start to finish. The five songs that comprise it narrate five different stories and it's amazing how easily they are transposed almost exclusively with music. Influences are not that many and used with skill and subtelty and they're rooted more in classical and traditional music rather that in modern genres.

The Australians were quite friendly, thanking and complimenting the audience, while also showing support for each other, which lead to a very cosy atmoshpere. The audience reciprocated with extensive and well deserved applause.

It's too bad for the people that couldn't make it or chose not to, because they missed a truly special show. But I hope that any of the three bands will return, as they said, rather sooner than later.
Dă-ne un LIKE dacă ți-a plăcut articolul.
Apreciază articolul. 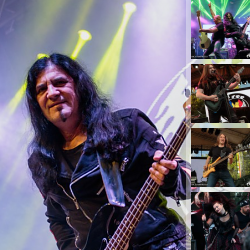 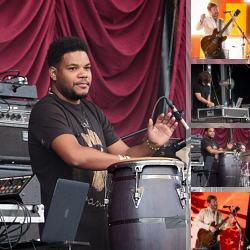