Autor: Alex, 23 Martie 2011
On the evening of 19 March, we had a truly bloody good time. The Moonlight Waltz Tour brought Theatres des Vampires, along opening acts Inopia, Fortress of Faith and Apotheosis, to Wings Club; once again, the location has proven to be the prime indoor choice for this kind of events (take a look at the photo gallery and imagine what it would have been like if such a show like the one Theatres des Vampires put on took place in Cage Club).

Apotheosis couldn't be joined again by Odin from Clear 5 Machine, the singer who delighted us with his vocals on Summernight City and Carry Your Cross and I'll Carry Mine on the 5th of march. He was replaced by Stefan from Inopia. Even though his performance was up to par, he doesn't posess the same vocal timbre, which led to the song sounding less Therion-ish than the last time. Even so, I still loved it.

Stefan then left the scene, the vocals on Tiamat's Carry Your Cross and I'll Carry Mine being performed only by Amelia, who did an excellent job. Despite the lack of secondary vocals, the song sounded very well, causing a round of applause at the end.

Like the last time, the concert continued with both original songs and covers alternating: Nightwish - Deep Silent Complete, The Quest, Amberian Dawn - River of Tuoni, Saladin's Dream, Nightwish - Over the Hills and Far Away, Dimmu Borgir - Perfection or Vanity.They sounded just as good, with a few minor exceptions on the originals - a few bits were somewhat out of sync - but nothing too significant to jeopardize the songs. Additionally, River of Tuoni deserves a special mention - the song feels like it's been created especially for Amelia's voice, even though it's a cover... if they had preserved the same tempo, I'd pick the cover over the original any time.

Obviously, such a fine display deserved an encore (the somewhat shy requests prompted Amelia to ask "Do you want another song?", and the crowd responded with a loud and determined "Yes!") - Stefan got back on stage for a repeat performance on Summernight City, a song which, just like at their debut, I wanted to hear again... and now I did. There's no way anyone can ever get bored by such a marvellous composition. It was a superb finale for a great performance, even though the visual presentation consisted almost exclusively of the band members' physical appearance, with very little onstage movement... but that's forgivable, taking into account that this was the band's second concert ever, and they've already offered plenty of reasons we should be optimistic about their future.


The second band to rock our eardrums in the evening of 19 March was Fortress of Faith, who brought a louder, harder sound, less gothic and more metal, and a lot of vitality... I hadn't realized that I listened to the exact same songs (with one exception) like the last time I saw the band until I read the playlist. The keyboards' volume was lower, while the guitars were cranked up high, resulting in a heavy/power metal performance which appealed to the public.

Fortress of Faith started off with Sound of the Unknown, a song boasting a fast rhythm, which instantly set the mood for what was to come. They continued with Insanity and then Midnight Mist, the few songs with a more gothic feel to them that evening... after that came the W.A.S.P. cover, Wild Child, which awakened the crowd from its melancholic stupor and set the hairs in motion. We then listened to Remember and The Fallen, both with a more aggresive sound than was expected.

The apex of Fortress of Faith's act was Rainbow in the Dark (Dio cover), with a remarkable performance from lead singer Vanda, who left her usual spot behind the keyboards and walked to the front of the stage, closer to the mesmerized fans in the first rows.

The band's last song, Echoes (Children of the Sky), returned the sound to its gothic roots. Overall, Fortress of Faith offered a flawless show; aided by the great acoustics of the club, the musicians could easily display their technique and enthousiasm along the 8 songs, with a more significant impact on the crowd. The well-deserved applause at the end crowned their performance, although an encore was not requested, probably due to the fact that many had come to see Theatres des Vampires exclusively.


Before Inopia even got on the stage, the area right in front got heavily crowded. The band was returning from a long absence, therefore I wasn't sure what to expect. I was hoping though that I'd get to see a band reborn right in front of my eyes. My optimism didn't disappoint; Inopia, starring Stefan (vocals), Salex (guitar), Georgiana (bass/flute), Teodora (violin), Claudia (keys) and Gomez (drums), played their best show I ever attended.

"We are Inopia and we want to blow the roof off this room!" shouted Stefan after the first song, which already shook the walls vigorously. Next came The Siege, sided by Stefan's impulse "Fight, my soldiers!". And we marched off to battle, led by Inopia's new, original sound, more brutal and epic, and better in all respects.

The band members' acting talent and abilities, especially those of Stefan and Salex, amazed and entertained us for the entire concert's duration; I haven't seen a band that feels so at home on the stage, communicates so freely and spurs the crowd into action like they did, in a long time. I don't think there was anybody who didn't appreciate the humour and movement on the stage, or who didn't headbang on songs like So Pure, Empire Falls, Firstborn of My Kind or Abigor...

Unfortunately, towards the end of the show arose the first problems: Gomez's pedal was showing signs of breaking, but they still tried to perform one more song with it, an adaptation of Stefan Augustin Doinas' verses, Mistretul cu colti de argint, which was by far the best in their collection, and also the most furious... so furious that Salex snapped a guitar string playing it. Although Cristi (Apotheosis) offered to lend his own guitar, the show was stopped because the hour was late, the moon was full, and the vampires were to descend at any moment.

In spite of this, Inopia was the event's most influential and most memorable act. The band has changed for the better, exeeding all expectations and proving that the time they took off wasn't wasted, but an opportunity they took advantage of to benefit their musical evolution. In other words, Inopia's quick rise greatly overshadows that of many others.


But the time had come for Theatres des Vampires to enter... curtained by the dark, dramatic intro music, four masked figures got on the stage, followed by a dark, slender silhouette wearing a black laced dress, covered by a cloak, with her hair blooming into a chaotic tangle and her face covered by a Venetian mask, revealing only a pair of blood red lips that softly kissed the microphone... the play was on!

As expected, Theatres des Vampires' playlist consisted mostly of tracks off the new album, Moonlight Waltz, interwoven with a few older songs. I hadn't listened to any of them beforehand, but over 10 songs in a lengthy show have been enough for me to form an opinion.

The best part of Theatres des Vampires' show were the visuals: a stunning and well prepared spectacle, perfectly displayed and greatly savoured by the fans in the first rows. Sonya Scarlet, the band's lead singer and most emblematic member, got from wearing the previously described clothing - first unwrapping the cloak, then the dress and the corset - to a two-piece latex suit, adorned with chains and metallic rings. The sensual and macabre dances, along with the vampiric and lustful consumption of blood, the picture of it dripping down Sonya's body, the opening of a spellbook (probably the Necronomicon) that burst into flames - all these merged into an extraordinary show, truly a visual feast for vampire aficionados.

The music, however, was plagued by a series of problems. Sonya's voice was almost muted on some tracks, and the instrumental part didn't help at at all... completely devoid of any brilliance, way too bland and repetitive, not exactly my pint of blood- err, cup of tea... I'm not a big fan of gothic, with a few exceptions, but sadly Theatres des Vampires' style isn't one of them. Strangely, the songs that the crowd appeared to enjoy the most (from Sangue to Carmilla) are also the ones that bored me, despite the kinky lyrics, full of vampire cliches.

While we're on the topic, here's the full playlist:


On the other hand, the majority that enjoyed every last drop of the show dictates that the music was so voluptuous, dark, deathly and full of bloodlust! So intense and passionate was it, that the vampire lovers' extasy culminated with a bouquet of blood red roses they offered Scarlet at the end of the show.

After the concert, the band stayed for pictures, autographs and discussions with the fans. They even took surprise pictures of themselves with fans, me included :D.

After all this, it's now time to draw conclusions.
Is it worth seeing Theatres des Vampires? Definitely yes, especially taking into account the fact that they used only a small part of their available props and costumes to produce a stunning display... now imagine what it would have been like had they had the possibility to show everything off.
But is it worth listening to the band? I'd say no to their newer songs, but adorers of oversized fangs would disagree.
Was it a good concert overall? Yes, I enjoyed it - even if I'm not too fond of vampiric themes - but only because I was also preoccupied with photographing the show. I don't know if I could have said the same had I not come with the camera hanging around my neck, though.
Dă-ne un LIKE dacă ți-a plăcut articolul.
Apreciază articolul. 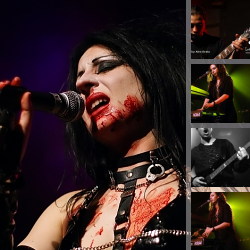 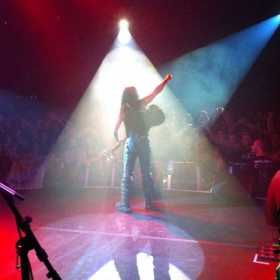