Autor: Andrei Vajna II, 29 Noiembrie 2016
After leaving a great impression opening for HIM in Timșoara's Roses Park last year, Myrath have returned to the city with their own concert, thanks again to Phoenix Entertainment. Since that first meeting, the Tunisian band has released a new album called "Legacy" in February. The concert held in Daos Club on the  27th of November is part of the tour for promoting this album, which also includes a date in Bucharest's Quantic Pub, on December 1st.

A decent number of people gathered in front of the stage. I even heard some foreign languages being spoken, so I assume Myrath has some big fans, willing to travel abroad to see them. And I'm not surprised, because the Tunisians offered a very high quality show.

Just a few minutes after the scheduled time, the intro track prepared the five musicians' entrance with "Believer", a song for which they've also produced a video. The good stage lighting highlighted the guys' distinctive clothing, which looked very natural, not exaggerated in the least bit, just enough to contour the oriental atmosphere.

Talking about their music, everything was superlative. I can imagine lots of ways in which a band that tries to mix power metal with oriental orchestrations would sound deplorable, resorting to metal clichés with keyboards pasted over. But what Myrath have done, is sublime. Elyes Bouchoucha's arrangements are not only remarkable, but they also mix perfectly with the rest of the instruments. Each one has its own role in the musical ensemble and benefit from the musicianship of their wielders. I think the song that best emphasizes this is "Wide Shut", which leaves the North-African tunes a bit behind for a more techinal (and techno in places thanks to the keyboards) composition, that reminds us of the band's more progressive beginnings. Each instrument comes to the foreground alternatively, from the keyboards to the guitar solos, while the bass (Anis Jouini) and the drums (Morgan Berthet) masterfully guide the melody. There are no seams between the passages, the translation is smooth and natural.

Frontman Zaher Zorgati pleased the crowd with his oriental trills, a few times even in Arabic. But he also has a great metal voice, which I thought sounds better live than on the albums, because of the unpolished raspiness. He even surprised with a few screams and high notes. I appreciated that even though he had no problems hitting them, he didn't abuse them, which is such a metal cliché, but instead they were used sporadically, just when needed. He also had good help in the form of Bouchoucha's backing vocals, which sounded so good that until I realized he was singing, I was sure they were recorded.

Zorgati also animated the crowd with success, even though there were rarely pauses between songs, sometimes just to mention the title of the next one. He told a few stories, he even joked a bit, and incited the crowd from time to time. An emotional moment took place for the song "Duat", inspired by Egyptian myths related to death. Zaher explained that in these stories, the narrator didn't sit on a stage in front of the audience, but was among the listeners, close to them. So he came off the stage, in the middle of the crowd, and asked them to sit on the floor, which they did. He did the same, and began to sing...

Guitarist Malek Ben Arbia was just as good as the others. His very melodious solos and memorable riffs were a real delight. He made a very good pair with bassist Jouini, who also enjoyed his own solo, but also a very interesting duet with keyboardist Bouchoucha.

The setlist comprised mainly of songs from the last two albums, "Legacy" and "Tales of the Sands", but also a couple from 2010's "Desert Call". By Zorgati's own confessions, "The Unburnt" has something to do with Game of Thrones... apparently. The three songs of the encore put an end to more than an hour and a half of an amazing show.

I really hope the tour is a success and that we will get to see Myrath in Romania again very soon.
Dă-ne un LIKE dacă ți-a plăcut articolul.
Apreciază articolul. 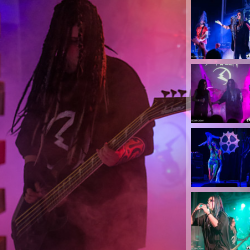 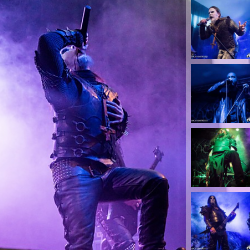