Autor: Andrei Vajna II, 4 Aprilie 2016
Methadone Skies are part of a wave of young stoner rock bands from Timișoara. The style of these bands is characterized by mostly instrumental songs, with influences from diverse other genres, and the composition is predisposed to experimentation, while the music gives birth to often psychedelic imagery. The :Egocentrics paved the way with the albums Love Fear Choices and Astronauts from 2010 and Center of the Cyclone from 2011. Methadone Skies made their debut in 2012 with the release of the cosmically-themed Enter the Void. Although well received, the real success of the band was fulfilled with their second album, Eclectic Electric, released in late 2014. Acclaimed by critics and by the growing fanbase, the album was promoted with a tour which spanned several cities in Romania, but also in Germany, Austria, Italy or Serbia. The band also sealed gigs at several festivals such as Tube Cult Fest, Feed Your Head, but also the well-known Exit Festival in Serbia, and its recent little brother, Revolution Festival in Timișoara.

Eclectic Electric was a big step forward as it gave the band its own musical personality. I was curious what the next step would be and I was expecting a continuation of the sound from the previous album, but that is not what the four musicians set out to do on Colosseus, their third studio album, and the subject of this review.

While Enter the Void was a conceptual album, structured as a story, with a beginning, middle and end, Eclectic Electric was five very different tunes, but they both were based on exploratory passages and an epic structure of the songs. On the other hand, the tracks that make up Colosseus are built of clearly defined, candenced verses, whose repetitions walk a fine border between lack of inspiration and artistic mean. The songs burst with a distorsed, full sound, often soothed by the clean, melodic guitar that has become a staple of Methadone Skies.

The album starts out with... a banjo intro, which quickly turns into a massive, distorsed riff, in the style of Karma to Burn, whom the band has mentioned as an influence. At almost exactly 5 minutes, this first track, called Moscufo, is a relatively short one for Methadone Skies, and it does a great job as an album opener. The dirty sound, the fast pace, the very rigid structure, the diverse flourishes sprinkled here and there and the contrast of the instruments as the verses alternate from one to another, keep the listener intrigued and get the blood pumping for the next track.

The Elemental is the bridge between Colosseus and Eclectic Electric, which is to be expected, since the song was the first one written, during last year's album promotion tour. The guitar is let to wander on its own, and the effects create a grandiose atmosphere, while the slow passages offer moments of contemplation on this musical journey. Basically, they lifted the cosmic theme and epic structure from the Enter the Void album and transposed it into the constraints of this album.

Ruse is a short ambiental refuge, a silent clearance, amidst a wall of sound, and it holds together the symmetry of the album's structure.

The title track suggests the image of monuments, probably also due to its name. But maybe not necessarily the Colosseum in Rome, or giant status, but maybe the Pyramids or the Taj Mahal because of the oriental insertions, or perhaps even the Tower of Babel. The jerky riffs are reminiscent of hammers pounding, suggesting hard work, while the melodic parts evoke grandeur, splendour etc. It might be the contrast between the hard workers that created such monuments and the rulers whose fame is tied to the realisation of these wonders, or it might be a metaphor for the toil of artistic creation. Each listener is free to let his imagination guided by the music. That's what this genre is about.

The most interesting song is the last one, Master of Convulsions. It starts as a sports car racing through winding roads, after which the drums get angrier and menacing, with some screams barely heard in the background. And suddenly all the instruments align and the song sets into a steady rythm. At first it's mellow, but after a few repetitions one of the instruments does something different, then the others fall in line into another set of repetitions. And so on, maybe there's an exta cymbal, or the guitar changes something, or a tamburine appears or even some claps, and the melody rises subtly in intensity, intriguing and amazing the listener. The ending switches to a low tempo before fading out.

The sound production is very important because each instrument plays its part, and repeated listens may give birth to new sensations. Cristian Popescu (aka Sol Faur) and Edmond Karban (Hupogrammos) from DorDeDuh, Sunset in the 12th House and ex-Negură Bunget took care of this aspect in their Consonance Studio in Timișoara, and the album sounds excelent, with every instrument being well highlighted.

The rythm ranges from groove to doom, and sometimes it's even something one can dance to. The guitar work has always been very inspired, but on Colosseus it's the creativity of the drums that grabbed my attention. This is probably evident on Master of Convulsions, but a great example is on Moscufo. At some point in the song the guitars maintain the same riff and it's the drums that give life to the melody.

Colosseus is a very interesting album overall. Methadone Skies surprise again with how naturally they create images through music. If their first album was an initiation, and the second one was more mature, this third album feels more like fooling around. But not fooling around like children, letting chaos reign, but playing around with different constraints and formulas, seeing what they can do with that.

Colosseus is available from April 4th on vinyl, CD or as a digital download from methadoneskies.bandcamp.com. 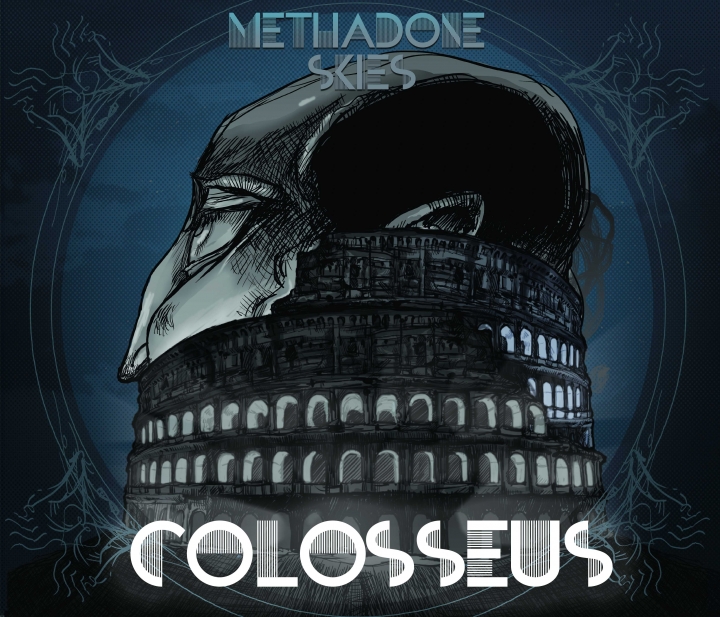