In this time saturated by tons of bands, better or worse, the release of a compilation can still be seen as a futile effort. Especially as being a folk - pagan - viking metal: in the 3rd millennium those styles means exactly what in the '90s meant black metal bands: either take you to ecstasy, otherwise change the CD.

Message Metal V was a surprise of big proportions: a smart selection of 13 bands from all over the world, in a well designed and a presentation to match. Yes, you must first start with the pack! The compilation comes in a DVD case for the simple reason that the booklet is a more than generous: two pages with detailed information for each band separately! A presentation of the elite, with excellent graphics and high-grade quality paper! Booklet contains everything necessary and even more than that: pictures, lineup, content, and a set of artistic pictures from nature.

Released in 2008 and limited to 2,000 copies, the compilation begins with local horde FIMBULVET, the "young band" pagan black metal, not far from the sounds of Romanian Ashaena or Bucovina, to give two local examples at hand. Folk metalheads from HROMOVLAD are the first band on the CD with a better known name. Pagan "citizens" of Slovakia are already wave band even managed two albums in 7 years of activity. A band that sounds reminiscent of the beginning of the Baltic, see first achievements Obtest or Skyforger.

At TUMULUS is useless to insist, the band is very known in Romania. Slavonic folk metal directly from its origins, a kind of our band Bucium. But DARK FOREST was a revelation! "Journey To Ever-Eternal Skies" is the piece de resistance of the entire compilations! Canadian David Parks, the man behind the project obscure band, manages to convey through his superelaborate an overwhelming sense of artistic fulfillment. "Journey To Ever-Eternal Skies" is a song very long, but extremely varied and very well planned. Pagan Metal from Canada, which proves that not only Europe have killer bands.

The film suddenly breaks on the next band, where we find TIWAZ. There pagan metal and Brazil! A band that goes with pride on the footsteps of Finntroll or Tyr. But back in Germany, DYRATHOR is the new name on the list. A young horde, with a song from their first demo. Pagan black metal clean, neat, a band that can promise.

XERION is another burst of pace, Spanish fits into the melodic black metal. Exotic is that the band chose the Galician language as a form of expression, in which he composed all tracks. Again, a project worth listening!

ADORNED BROOD is already legend in German folk metal! From the same label of our Interitus Dei, the Germans offer a song from their latest CD, "Noor". Perhaps the most evil song on this compilation, "Sons Of The Damned" is a complex yet paradoxically elegant by its aggressiveness. From North Ireland: WAYLANDER, cetic folk metal band almost unknown to us, but with some notoriety outside, they are having already a contract with Listenable Records, big name in the music industry, actually the song on this compilation is just the opening track of their latest album.

Natan is probably the only band close to 100% melodic black metal on this CD. Not very original track, though with some effort Belgians offers a successful song from their only album, released in the end of 2008. A quality band, well pigmented compositions with violin passages, which are the delight of this CD.

If Natan is just starting, ANDRAS are the oldest band on this disk. Born in Saxony, the Germans have always known to march on epic black metal side. Andras was and is still a valuable band, shame that they hadn't the good fortune to have a strong name in the underground, after so many years of concerts and many albums... Same situation for OBSCURITY, vikings in West Germany, much less known to us, but consistent with a "business card".

VINTERNATT ends the compilation, this is a band originally from Belgium, which unfortunately has stopped work in the meantime. "De Zwarte Mis" is a song not reelased on their demo. Selflabeled "blackish melancholic metal", this band demonstrates that the Belgians could have done a beautiful job. I sincerely hope for a return. 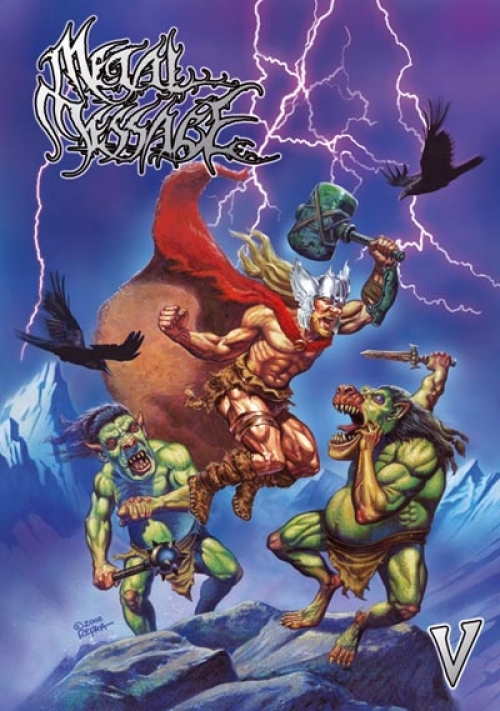