Manowar - The Lord of Steel

Autor: Andrei Vajna II, 23 Iunie 2012
In their new album, Manowar embraces the future, while praising the past. The Lord of Steel comes with a new sound for the band, but with references to previous albums in their discography. The novelty that stands out is the sound of Joey DeMaio's bass, which is very distorted, similar to that of stoner rock bands. The second interesting thing about this album is that Donnie Hamzik is back behind the drums since the very first Manowar album, the legendary Battle Hymns.

The album starts in full force with the title track. From the start we get a fast paced, hipnotizing riff, driven by the bass and drums - a mix that sets the stage perfectly what the rest of the album will be like.

After titles like Brothers of Metal, Metal Warriors or Kings of Metal, we get Manowarriors, a metal anthem with a catchy riff and a chorus straight out of the '80s, old school choir and all. The song manages to sound both modern and classic at the same time

Born in a Grave draws attention by its theme and an excellent solo from Karl Logan. It introduces us to the world of vampires, just as Each Dawn I Die did on the album Hail to England.

Righteous Glory is the only ballad on the album, growing the list of songs inspired from the Norse mythology. Speaking of the moment of final glory it reminds us of Sword in the Wind from Warriors of the World. Eric Adams's tender voice is enriched by an effect that makes it sound majestic. This will certanily mark a very emotional moment for many fans.

Next, The Lord of Steel switches to a much livlier tone. Touch the Sky is full of energy and good spirit. The melody, lyrics and passionate voice, are meant to cheer you up in any situation, to make you feel that you really can touch the sky. The lyrics are also full of wise words, making direct references to Mountains from Sign of the Hammer.

The most unusual track on the album is Black List, which reminds me of the underrated Burning from The Triumph of Steel. It is an almost instrumental piece, which repeats the same segment over and over again. The bass, the guitar and drums combine in an ondulating and hypnotic groove, while the "in your face" lyrics sung in a harsh monotonous voice are accompanied by the stinging notes of Karl Logan's guitar.

The following two titles come straight from Hollywood. Expandable is inspired by Sylvester Stallone's action film, while El Gringo, with its galloping melody, is included on the soundtrack of the modern western with the same name.

The last two songs, Annihilation and Hail, Kill and Die bring us to the end of our journey with The Lord of Steel. With such titles we would expect two very heavy tracks, but that is not the case. Annihilation is characterized by electrifying mix of bass and guitar. Karl Logan is all over this one, topping it off with an amazing solo.

The last track is a disappointment. Hail, Kill and Die is a kind of Blood of the Kings part II, with its lyrics made up of the titles of previous albums and songs, but in a totally uninspired way that becomes ridiculous. In addition the song is slow and uneventful.

Overall, the album has its good and bad moments. The bass sounds very distorted and often turns into an annoying buzz. But many times, the bass is the one that sets the tone for the songs, mixing well with the guitar and delivers a catchy groove. It might have been better to use the new effect sparingly, not on every single track.

The lyrics are mostly OK, nothing exceptional, on par for Manowar. They are very direct and concise, reaching their intended goal. However, it often turns into nonsense, uninspired recycled phrases, which denotes an apparent writer's block. Not even Eric Adams stands out as he should. There aren't many highlights from him, as he rarely comes out of his comfort zone, especially since many songs end with a fade out, repeating the chorus excessively, but without giving the rise in intensity that would be expected. However, his overall performance can not be put under any doubt. In the key moments it goes up to 10. Karl Logan is the one that stands out most on The Lord of Steel. With a clean sound, excellent riffs and solos that leave his fingerprints across the whole album. His guitar work is simply exhilarating.

The Lord of Steel is not the best Manowar album, but certainly not a failure if we judge objectively. Although it seems unpolished and rushed, in this context it is a great achievement. It offers a fine selection of new classic songs, with a unique sound, but that is undoubtedly Manowar. It has to be remarked that the album has no fillers, no intro, no narrations and no instrumental pieces, just about 50 minutes of uncompromising metal. Each song is unique, has its own story, taken out of the band's 30 year discography. It ranges from feelings of good will, to humbleness, hatred and boldness, from metal anthems, to an epic ballad, to fantasy stories of different heroes. In other words, we have a cohesive and well structured album.

Personally, after just the first audition I was already stuck with 3 songs in my head, which makes up for an amazing album. My Favorites: Touch the Sky, Manowarriors, Black List. 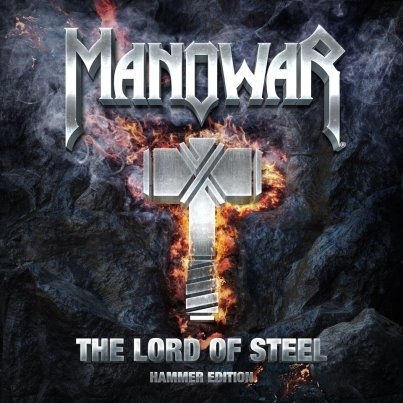