Autor: Andrei Vajna II, 27 Septembrie 2014
Finntroll's 2014 tour made a stop in Timișoara as well, thanks to promoters Metalhead and Daos club as hosts.

Very rarely do I enjoy opening bands as much as I did on this night. The Fins from Profane Omen and the Danes from HateSphere were indeed a very welcome surprise. The two bands play very similar music. The former look like Ugly Kid Joe, but they play melodic death metal, with a blazing and energetic rythm. The quite technical growls sung with much passion, are always accompanied by guitar melody. The two guitarists complement each other seamlessly, alternating solos and rythm and lead roles. And the drummer is amazing, wild and full of energy. In contrast, HateSphere are a classic groove metal band, Ã  la Pantera, with down-tempo, short riffs, perfect for headbanging.

They had a wilder response from the audience, who chanted the band several times during the brief interludes, and who didn't need much invitation to jump into a mosh pit or wall of death. The vocal was quite humorous with the crowd, and interacted often with the ones in front. Profane Omen had just a small crowd in front of the stage, as they were the first to play, but nevertheless, they fared admirably and received much deserved applause. I also remarked that all musicians from both bands had always a smile on their faces, and the pleasure to be on stage in front of a crowd resonated with all of us, making the show just that much more enjoyable.

Going forth to the main event, this is the second time Finntroll are in Timișoara, since the Bloodsvept tour from a year ago. This time, the concert celebrates 10 years from the release of the Nattfödd album, which they played in its entirety - "from beginning to end" (yes, even Marknadsvisan), just so that there are no complications. The first songs warmed the atmosphere quite nicely, so that for Trollhammaren everybody was chanting the chorus. Nattfödd created a magic moment. With the stage in dim red lights, engulfed in smoke, it seemed like we were gathered round a fire, with the Trolls singing us a story. The melody of the guitar made your imagination flow far away, while the song of the keyboards made you sway to the song. And I just have to agree with the band's decision: Swedish is such a beautiful and magical language! Of course, the magic of the moment would have been ruined if not for the makeup and troll ears.

Another interesting, but funny event, occurred during Det iskalla trollblodet, when a little "elf" from the crowd jumped on stage, shaking his whole body to the music like the most badass metalhead. Then he was crowdsurfed away by the front rows, until finally being recovered by (I hope) his tutor.

The first part of the concert ended with Grottans barn (but without the yodels, sigh), in my opinion the most beautiful of the songs from the album. After a short break, "something completely different" followed, but not by much. The band made a pass through its whole discography, the first song being Bloodsvept. They even sang something from their very first album, Midnattens widunder, which also celebrates 15 years from its release. Obviously, Jaktens Tid had do make the setlist. All in all, they continued for more than an hour. After the last song, they let the audience wait for quite a while, but the crowd's perseverence in calling Finntroll back was duly repayed with another three songs.

An excellent night like this is hard to be surpassed: three great bands, quality sound and a magic atmosphere. Thank you to the bands and everybody else who made this possible! 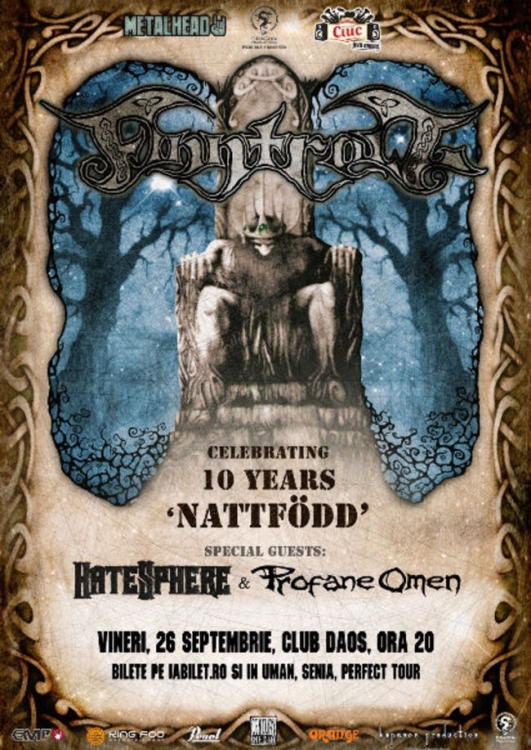